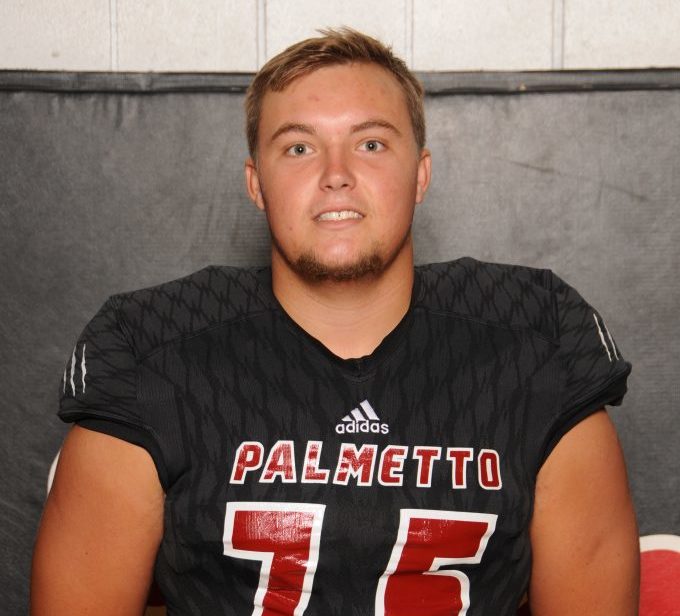 This past Spring was just like any other for the Tiger’s Football Program in regards to college recruiting. Every year between 60-70 schools come by school to view Palmetto’s Top College Prospects and this year was no different with one exception and that is the intrigue of Top 2020 Prospect Lee Mathews. Many major universities work in 2 year cycles for the “Recruiting Process” and Lee drew the attention last year as a Tackle by many college coaches during their Spring visits. Head Coach Dave Marino said, “The feedback I was getting from all the Power 5 schools was if he moved to Center they would Offer him”. The reason was so many D-I Programs are sticklers about “Measurables” such as height/weight/strength/speed. Since Lee is 6’4” he fits into the Offensive Line Inside Measurable as opposed to Tackles which are 6’5” or taller. Since his move this past Spring to Center he has received several Power 5 D-I Offers from schools such as Rutgers & Illinois. Lee will be going on an “Unofficial Visit” this summer and will weigh out his options before committing.

Lee served as an Offensive Captain during the Spring Game against Sarasota Riverview helping to lead the Tigers to a 44-21 victory. He’s been a catalyst for the last 4 years in bringing excitement and enthusiasm to the team whether it was during the season or Offseason conditioning. Lee discussed his personal goals but was more focused on the Team Goals when stated, “Our Team Goal is to win every game and win a championship”. His passion for the game is contagious among his fellow teammates and there is no doubt he will continue to provide great leadership for this team and their quest for a championship. Lee stated, “This is the best Team Effort he’s seen in his 4 years at Palmetto”. With Lee’s leadership along with the many talented players by his side the future looks extremely bright for the Tigers as they approach this 2019 season.